My introduction to world of amateur radio

On March 23rd, the Governor of Pennsylvania, Tom Wolf, issued stay at home orders for seven counties, including Delaware, my home county due to COVID-19. Since I am currently a rising senior in college, my spring break was extended in early March and all classes were online for the remainder of the semester. Most people get home at the end of the day, click a remote, turn on a controller or log into a computer, performing a combination of Netflixing, texting, or scrolling through at times, perplexing posts from barely acquaintances. But I wanted something truly captivating to help me survive the mental and social chaos of Coronavirus. I knew something as trivial as a book or puzzle would not suffice. I became immersed in a suggested videos YouTube search for a quarantine hobby that would hold my interest longer than a potentially long and drawn out retreat. My search led me to a YouTube videos about ham radio. I learned that thousands of people around the world were having discussions across a worldwide network of hobbyists. I also learned you can get started with a cheap but controversial Chinese radio on the market, called the Baofeng UV-5R, which sells for anywhere from $20-40.

Setting up my first radio and programming repeaters

I unboxed the radio, and was able to figure out how to download a free, open sourced software, known as Chirp, through a separately purchased programming cord, which utilized a counterfeit chip in its USB. This also required a driver for my Mac. It was important to locate a repeater to extend my range, because my minuscule 4 watt radio could only reach certain bandwidths of lengths limited to a few miles or less.   Geography such as buildings, hills and trees can create barriers to the signal, aswell. A repeater is like a cell tower network for amateur radios, set up by private individuals and clubs, with their own funds. Chirp automatically programmed the local (some 200) repeaters on my radio, within a 40 mile radius of my closest city, Wilmington, DE. With the help of the repeater, my listening or transmitting signal could be amplified to a radius of 40 miles plus. Many local repeaters are also connected to the internet, and to other repeaters with a variety of digital systems, including one known as Echolink, which can allow me to listen to anyone, anywhere on the planet.

Due to the legal necessity for a license in order to transmit, in my first week, I just listened. I heard repeaters all over the greater Delaware Valley and sub-Philadelphia metropolitan areas. This amounted to three transmissions from Thorndale and Newtown, Pennsylvania, four from Parkesburg, two from Philadelphia, one from Reading, five from Delaware City, Delaware, and one from Pennsville, New Jersey. My first few listening sessions were the type of transmissions one could imagine. As sisbrawny on YouTube commented, “It seems 90% of conversations using ham revolve around the fact they’re using ham.” This is for the most part true. However, I soon found that I was listening for the other 10% of conversations, ones that only someone with a specialized radio and credentials could hear. This not only furthered my interest and knowledge, but introduced me to a variety of interesting acquaintances which I probably never would have met under normal circumstances.

After a motley of local transmissions on the same repeater, I witnessed my first international conversation, via EchoLink. I was listening to repeater N3JLH, in Delaware City, when a robotic voice abruptly announced that EchoLink had been connected. By the local guy’s voice on our end of the repeater, I could tell he was advanced in age. I learned by listening that the individual on the other end of the repeater, via EchoLink was in Israel, and it was about 2:00 AM his time. He was speaking very quietly and mentioned he didn’t want to wake up the other members of his household. After some startlingly normalized conversation about their respective dogs, the conversation drifted toward the lockdown. I learned that in Israel, the lockdown is much more severe, and the government is heavily involved in the international vaccine race. In a few moments, I had learned more relevant and interesting international information (minus the general conversation concerning their dogs), than I could on any news network. Merely listening to the conversation was incredibly eye opening. I never would have imagined how casually and respectfully an old man in the Delaware Valley and someone in Israel could talk about their dogs and the larger, global conflict.

Another conversation of interest, which I had the privilege of hearing, was via Philadelphia’s KD3WT repeater, between a German-American man of roughly middle age, and a man from Manchester, England. The German spent much of the time talking about how he was angry that many people associate Germans with Nazis and the Holocaust, when he hadn’t even been alive for it. The conversation took an even deeper side, when the Englishman and the German discussed how many people who commit horrible atrocities are deemed ‘normal’ and ‘functional’ members of society, right up until the atrocity is committed, and sometimes during. The Englishman agreed, and expressed his disinterest in Word War II related video games and movies, as he thinks they perpetuate unfair stereotypes of the ‘all good’ or ‘all bad guys’. A conversation definitely worthy of listening, it was one where people of two different nationalities, discussed a motley of different and controversial topics, mostly none of which had to do with the Covid 19 outbreak, and neither of them became ‘triggered’, enraged, or corrected each other. Surprisingly, the conversation I witnessed, was more respectful and intellectual than many collegiate, ‘round table’ discussions I have been a party to, which deal with much more tame, even mundane academic topics.

After hearing these conversations, I wanted to finally make a contact for myself. With the help of Ham Radio Prep I passed my test for the technician license in June, and received my confirmation from the FCC later that month. I made it a goal to transmit in the few ways possible, via VHF (Very High Frequency), and UHF (Ultra High frequency) and with the local repeaters pre-programed into my radio. I quickly found that nearly everyone I talked to, was unique and had their own personal reasons for joining the hobby. I rapidly racked up a list of regular contacts I talked to weekly. One operator joined the hobby because his great grandfather was an amateur who intercepted the Titanic’s distress signal and became obsessed with the hobby for life from then on. A few others had disabilities preventing them from getting outside. Others were do it yourselfers, tinkerers and preppers. Overall, they were an eclectic group, who all actively maintain the most important aspect of Ham radio, communication. Obviously, by this point, I was hooked.

I have since received a 1960’s Heathkit HW-16 CW rig meant for Morse Code, and have ordered the proper components and how-to books from Ebay and Amazon to get it back online. I am also looking into stepping up to an ‘All Band’ radio such as the Yaesu FT-991, so I can begin to learn other modes besides the 2 meter and 70 CM bands my Baofeng is limited to. I realize now that Ham radio is a lifelong journey in knowledge and a provides unique ways to socialize with others who one may never meet through the course of normal life. Ham radio is also probably the safest and most interesting way to socialize during the era of Coronavirus. I am grateful for this gift and the study tools at hamradioprep.com, which assisted me in passing my technician exam, and look forward to writing for them in the future. I also look forward to sharing my journey as I progress in the radio arts. And remember – you can unlock and discover the hidden discourse for yourself!

3. Ortiz, Jorge L. “Coronavirus in the US: How All 50 States Are Responding to This Public Health Emergency.” USA Today, Gannett Satellite Information Network, 31 Mar. 2020, www.usatoday.com/story/news/nation/2020/03/30/coronavirus-stay-home-shelter-in-place-orders-by-state/5092413002/.

Daniel Kipp Astin, KC3PKQ is a resident of Southeastern Pennsylvania and a 22 year old Senior student of Creative Writing at Susquehanna University. 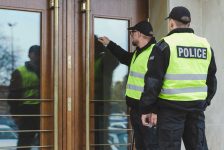