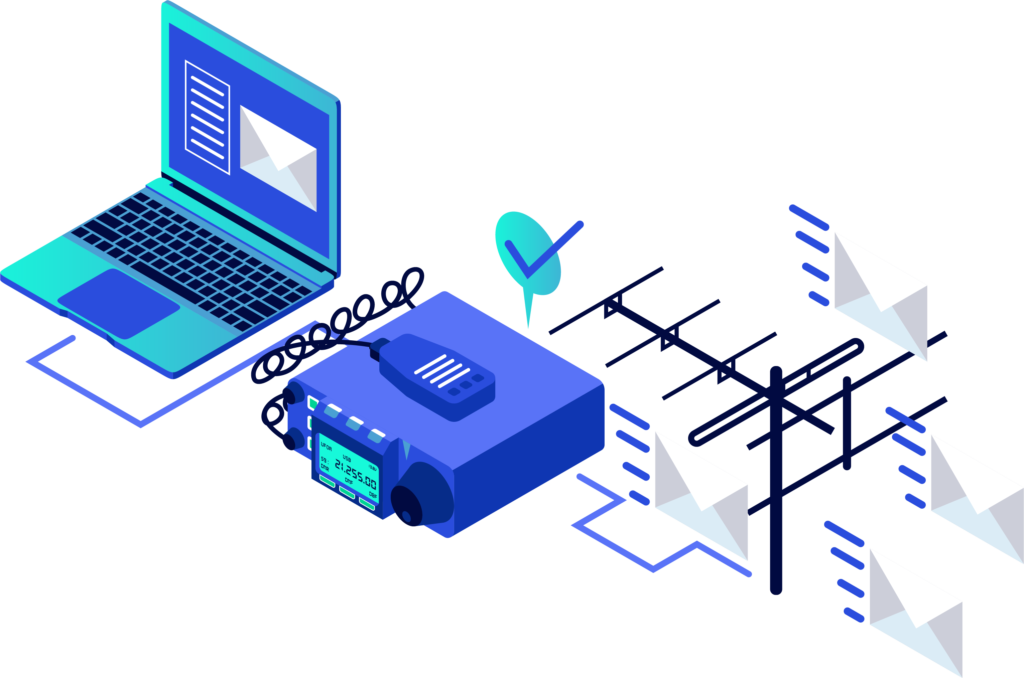 Amateurs support interoperability with Winlink systems for a variety of uses

Ham radio operators are known for doing cool things, like using ham radio to fly first-person view drones, transmitting TV signals and talking around the world on a handheld transceiver. Another cool thing that hams do is to send email over ham radio in a system known as Winlink. This has proven to be a great asset in amateur radio’s emergency communications tool chest.

Winlink, also known by its service mark, Winlink Global Radio Email, and as the Winlink 2000 Network (or WL2K), basically is a worldwide messaging system that uses amateur radio frequencies, as well as government frequencies, to provide email capability automatically and independent of the internet. This allows ham radio to step in when routine systems are down in disaster and emergency situations and still perform a routine function — email.

Winlink uses smart-network radio relays to send messages from one point to another. Email on the Winlink system can include attachments and also offers position reporting such as Automatic Position Reporting Service (APRS) reports as well as weather and information bulletins, emergency and relief communications and message relay. Winlink operators, who have to be signed up to use the service, operate under a system that was built, operated and administered by ham volunteers. A non-profit charity, the Amateur Radio Safety Foundation, provides support for the system.

Winlink uses a worldwide HF system that can be used nearly anywhere in the world. By connecting a single sideband (SSB) radio to a computer with dedicated software and a modem interface, Winlink email messages can be sent throughout the system for endpoint delivery. The system also provides separate parallel radio email systems for the Military Affiliate Radio System (MARS) and the United States Department of Homeland Security SHARES (SHAred RESources) HF network among other users.

If you’re interested in assisting with message delivery on the Winlink system, you’ll need to go to www.winlink.org and find out what you’ll need. The actual signup is through the client program that you will use on your computer. Only licensed hams are allowed to register for the Winlink system.

The Winlink system has proven highly reliable over the years. The system is available 99.99 percent of the time and message transmissions are 100 percent accurate. Various HF, VHF and UHF systems are deployed to connect throughout the Winlink system. Gateway stations transfer Winlink emails between hams and the internet. Winlink has proven highly reliable for remote access to email over radio frequencies.

WL2K allows hams to send and receive Winlink email using the PACTOR or WINMOR digital mode on their HF radio — or via packet on VHF or UHF frequencies. On HF, you’ll need a sound card and software to send via WINMOR, or a separate communications processor that supports the PACTOR family of digital modes. If you’re just using VHF or UHF, a simple packet terminal node controller (TNC) will allow you to access the radio system through a local relay station. Once you are registered on Winlink, you’ll also need to download and install a compatible email program such as Airmail.

What are the frequencies for Winlink?

To discover the frequencies used by worldwide Winlink stations, go to https://winlink.org/RMSChannels. The stations cover most of the planet, offering wide area access.

Are there restrictions on Winlink email?

There are common-sense rules on the use of Winlink over amateur frequencies. Of course, you can’t encrypt messages or send business or obscene messages.

But don’t let that stop you because WInlink will let you offer a service to your community when all systems fail. When the internet is down, you will be able to step in and provide a valuable service by passing emergency and priority emails for agencies in need.

Ham Radio Licenses: Which is right for you?

Use your Baofeng VHF and UHF Handheld Radio for Ham Radio

Why Do You Need A Ham Radio License for Flying FPV Drones?